Tattva means ‘thatness’ or principle, reality; it is the very being of a thing.

Kashmir Shaivism describes the manifestation of the universe in great detail—a process whereby the one undivided Consciousness (Shiva) opens out and becomes the divided (and beautifully diverse) universe we perceive. This process has 36 stages or tattvas, each one a little denser than the one before. The first tattvas have the highest, purest vibration. They are unobstructed Consciousness and light. Descending through the tattvas, the light darkens, things become more veiled, dull, ignorant and heavy. At the conclusion of the process, we have a material universe. Here, Maya, the mysterious principle of veiling and separation, has full sway.

Because Consciousness is the only one substance in this universe, each of the 36 tattvas is nothing but Consciousness vibrating at particular frequencies and behaving in specific ways. Even at the most dense stages, all the previous, higher tattvas are still present, though not explicit. The divine realm of grace is never remote. At every point and in every condition man has access to higher Consciousness, higher tattvas, by an inner movement of his attention. This is an important point—the creation of the universe is conceived of as an opening out—not a linear movement, but a movement from the centre to all points on the periphery. Meditation is thus a glance towards the centre, a ‘getting in touch with’ the purest vibrations of Consciousness.

What’s so Important About Them?
In India, philosophy is also called darshan, because it is not merely a mental construct but a way of ‘seeing’ ultimate reality. The vision of Kashmir Shaivism is more than optimistic. It says you can overcome suffering by yoga, meditation and knowledge. Therefore, it is said that the disciplined study of the tattvas will bring you closer to your own God consciousness. Yoga means ‘union’ and union with the Oneness is achieved through knowledge—by a deep love for that knowledge of God. When you study these sequences of elements you are reading the manual of how you created this universe.

The tattvas can be enumerated from the bottom up or the top down. The top down order (Shiva > Earth) is the order of creation. The bottom up is the order of liberation, or return to source. At the top of the tattva hierarchy (Shiva Tattva) all the principles are present in potential form, while at the bottom all those potentialities inherent in the divine are fully expressed.

We should remember that the Tattva structure is a map and while maps have something to do with reality they are not the same as reality.

Three Sections
Kashmir Shaivism divides these 36 tattvas into three main parts: the pure, the pure-impure and the impure tattvas.

1. Impure
Creation is the eternal play of opposites. The impure tattvas relate to that level of experience based on duality. This is the normal experience of a human being.

2. Pure-Impure
The pure-impure tattvas relate to a higher order of experience. Differentiation and multiplicity exist—a world of forms—but the underlying unity is clear. The Shaivites describe this as an experience of the universe as one’s own body. It is not the experience of a separate person—but of God.

3. Pure
Finally, the pure tattvas refer to Consciousness in its pristine form. Here the world of objects has totally disappeared. There is no world, but only vibrating Consciousness. This level is attained by yogis who reach nirvikalpa samadhi. However, when a realised yogi operates in the world, this is called sahaja samadhi, or natural samadhi. Here, he remains in a middle state in which duality is perceived but rendered harmless. The world of objects exists, but one rests in absolute peace, joy and unity. The attainment of this state is liberation, and said to be the final the goal.

Five Energies of Shiva
Tattvas one to five represent the divine realm of perfect experience, pure Consciousness. There are different changes that happen within that realm, but unity and divinity are never lost. Shiva, tattva one, is transcendent Consciousness. He is the Brahman of the Veda, pure light. Tattva two is Shakti, Shiva’s consort. Here the pure light becomes active, creative and self-reflective. Without Shakti, Shiva is incomplete and ineffectual. With Shakti, the universe teems with creativity and abundance. By seeing Shakti as the dynamism of God, Shaivism separates from Vedanta whose highest principle is inactive.

Shiva and Shakti are not really two. They are God and His power, the light and self-awareness, yin and yang, male and female. You could say that these first five tattvas are different roles or aspects of God. Still, there is only One. He is not lost; He has not forgotten who He is.

By enumerating five divine or pure tattvas instead of one, the Shaivite masters give us a fuller and more varied portrait of the Absolute. Here are the different moods of Shiva: Shiva as perfect will {tattva three), Shiva as pure wisdom and light {tattva four), Shiva as omnipotent activity {tattva five).

The Tattvas
Earth #36
Even though Earth is at the bottom of the tattva hierarchy, it is not seen by the Tantrikas as the lowest of the principles, but rather the most complete: that level of reality in which all the tattvas are fully manifest.

Earth element is the principle of solidity, density, resistance, and roundedness.

Senses: Hearing, touch, and sight.
Bija mantra (seed-syllable): Ram.
Wind #33
Wind is the principle of mobility. The primary characteristic of air is the way it moves to fill a partial vacuum, constantly seeking to even itself out.

Senses: Hearing and touch.
Bija mantra (seed-syllable): Yam.
Space #32
Space is the principle of vacuity and of extension.

There is nothing to do other than to realize your own true essential nature, which is Shiva consciousness. Once realized, the main insight is that the subject, or Consciousness, is not separate from the object, or matter. The liberated being should experience directly that the object he perceives is contained within his subjectivity, that is, within Consciousness (see Theory of Reflection).

A liberated being sees the universal (macrocosm) in the specific (microcosm). If everything is made of the same Consciousness then every part recapitulates the whole. As above, so below; whatever is true of God is also true of us. If we want to understand God or the universe then we would do well to understand ourselves. A human being is a hologram of the universe. The ocean is contained in the drop. This mystery transcending time and space is the essence of Consciousness.

Trika Philosophy
Kashmir Shaivism is also called the Trika philosophy, the three-fold science based on the three energies of Shiva, because it discusses these three subjects:

As long as one resides in the contracted objective energy one is the victim of sadness and sorrow and is entangled in the wheel of Samsara (repeated births and deaths). One symptom of contracted awareness, is a complete denial of “higher” reality. This denial is not based on blindness but on the absence of experience. So one has to emerge from objective, contracted energy and enter into the supreme subjective energy, in which one is liberated from all this sadness, and becomes absolute in the attainment of final liberation.

The Five (+1) Powers of God
The Divine exercises its five powers as an expression of its innate freedom (svatantrya-shakti) and total autonomy. These powers pervade all reality, and nothing exists separate from them. They are the fundamental nature of God. Kashmir Shaivism invites us to recognize the powers as our own.

Please note: svatantrya-shakti pervades all five powers and thus is considered to be the sixth power.

The human individual is nothing but God in a contracted form. When the individual looks at himself, he notices that he has the same qualities as the Absolute, though they are shrunken and contracted. God has perfect will, perfect knowledge and perfect ability to do, while the human individual has all of these powers in limitation. They show up in him as three basic knots within his being. The first knot is limitation of will. The human individual experiences it in his heart as a painful sense of separation, weakness and grief. This is the fundamental birth trauma in which God becomes the individual. The limitation of knowledge is experienced in the mind. The human mind experiences darkness and confusion and strains to understand the truth. The third knot is experienced in the navel area and is felt as a sense of frustration and lack of fulfilment.

The power of being eternally and absolutely conscious and present. At the cosmic level, this power is pure unconditioned presence, aware of itself and the universe that unfold within it. At the individual level, we experience it as the awareness that allows us to experience both ourselves and the world around us. It is the fundamental experience of being sentient and is shared by all creatures.

The bliss that arises when Supreme Consciousness experiences its own true nature. At the individual level, it can be experienced as every kind of natural happiness: the simple feeling of relaxation or contentment, the satisfaction of eating a delicious meal, the ecstasy of orgasm, the subtle joy of falling in love, or the deep meditative blissfulness.

The creative impulse of Supreme Consciousness to want to be all things. At the individual level, it is the fundamental will to live, to exist, as well as every form of desire. Our will, or desire, is the source of all creativity.

The power of intuitive knowing and self-organization. It’s the Supreme Intelligence that runs the universe, the power of knowing that exists within every cell. At the invididual level, in the human mind, it is the capacity to know, to plan, to discern, and to make judgements.

The power of Supreme Consciousness to do anything, such as bring universes into form. To do the impossible, which is create duality while maintaining unity. At the individual level, it manifests as the activities we perform as humans.

The Five Acts of God 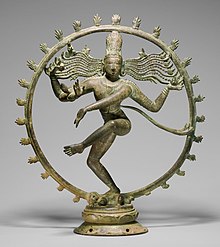