… first of all there is the plain white circle which is understood to typify the Absolute; in that appears the central spot, the sign that the First Logos has entered upon a cycle of activity; the spot broadens into a line dividing the circle into two parts, thus symbolizing the dual aspect of the Second Logos as male-female, God-man, spirit-matter; and then, to show the next stage, this dividing line is crossed by another, and we have the hieroglyph of the Third Logos – God the Holy Ghost, the Lord, the Life-giver.

But all these symbols, be it noted, are still within the circle, and so are emblems of different stages in the unfolding of the Triple Logos – not as yet of His manifestation. When in the fulness of time He prepares for this further descent, the symbol changes, usually in one or other of two ways. Sometimes the circle falls away altogether, and we have then the even-armed Greek cross as the sign of the Third Aspect of the Logos at the commencement of a great cycle, with His creative power held in readiness for exercise, but not as yet exercised. [89]

Along this line of symbolism the next step is the svastika, which always implies motion – the creative power in activity; for the lines added at right angles to the arms of the cross are supposed to represent flames streaming back­wards as the cross whirls round, and thus they doubly indicate the eternal activity of the Universal Life, first by the ceaseless outpouring of the fire from the centre through the arms, and secondly by the rotation of the cross itself. Another method of expressing the same idea is seen in the Maltese cross, in which the arms, ever widening out as they recede from the centre, once more typify the divine energy spreading itself forth in every direction of space.

Sometimes, instead of dropping the circle altogether, the cross simply extends itself outside it. Then we get the equal-armed cross with the small circle in the midst of it, and in the next stage that circle blossoms forth into the rose – another well-known life-emblem – and so we have the familiar symbol from which the Rosicrucians take their name. Again, the cross not only bears the mystic rose in its centre, but itself becomes rosy in colour, showing that that which is poured out from it and through it is ever the fire of the divine love.   From: The Christian Creed by C. W. Leadbeater 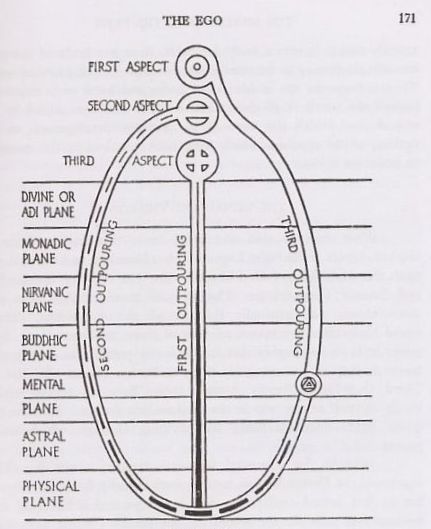