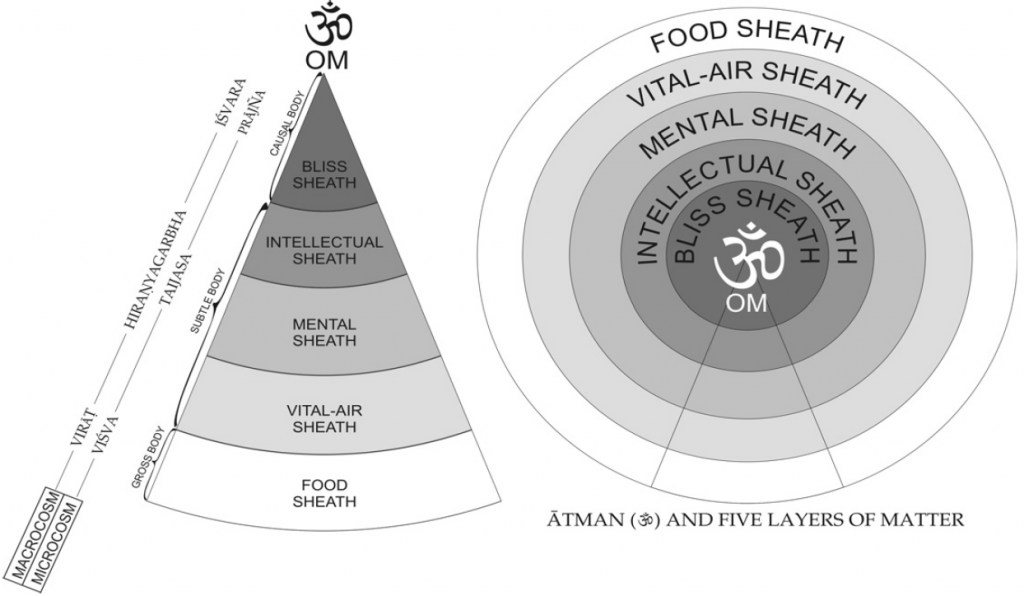 Within the five-sheath structure of human beings lies pure Consciousness which is called Ātman. The Ātman (Consciousness, Brahman, Self, Awareness) veiled by the five sheaths may be compared to a person wearing five layers of clothes, each layer representing a sheath.

Just as the wearer of the clothes lends life to the lifeless vestures when they are worn, the Ātman provides sentience to the five insentient material layers of the human personality.

The Ātman is the innermost of all. This picture of concentric circles of matter with the Ātman residing deep within generally leaves a wrong impression in the minds of students that the Life Principle in human beings is an infinitesimal entity.

Such a conception is opposed to the repeated declarations in the Upaniṣads that the Ātman is omnipresent, omnipotent, and omniscient. The term ‘within’ should not be taken literally. It is used here in a philosophical context and, therefore, its implied meaning should be understood.

In the Vedāntic literature, when a sheath is described as being interior to another, it means that the inner one is subtler than the outer. The subtle controls, regulates, feeds and nourishes the gross.

Hence, the Ātman (Consciousness, Brahman, Self, Awareness) which is the subtlest, being the controller and the nourisher of all layers of matter, is described as the ‘innermost’.

Again, in this philosophy subtlety is measured by its pervasiveness. An object is said to be subtler than another if it is more pervasive.

For example, when a piece of ice melts, the water formed spreads over a larger area than the ice.

In philosophy, this phenomenon would be described as ‘water is subtler than ice’.

Further, when water is boiled steam spreads in the entire atmosphere thereby filling a much greater space than it occupied in its condition as water. Steam, therefore, is considered to be subtler than water.

Applying the same principle to the five sheaths of the human personality, the food sheath is considered to be the grossest by virtue of it being the least pervasive.

The vital-air, mental and intellectual sheaths follow the ascending order of subtlety in that order and the bliss sheath, being the most pervasive, is the subtlest of sheaths.