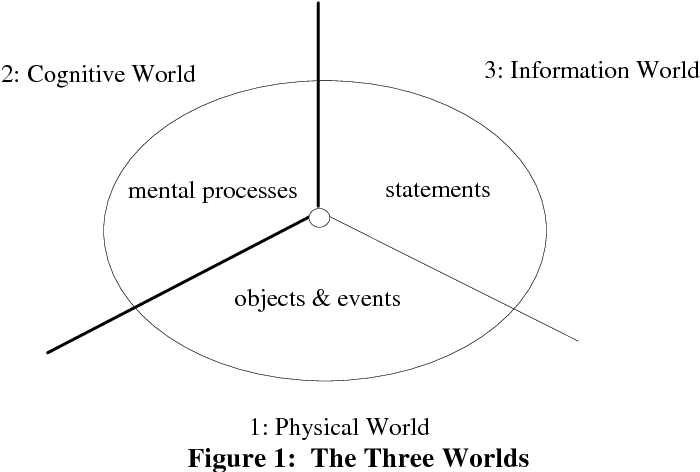 Extract from:
KARL POPPER: THE TANNER LECTURE ON HUMAN VALUES
Delivered at The University of Michigan April 7, 1978
In this lecture I intend to challenge those who uphold a monist or even a dualist view of the universe; and I will propose, instead, a pluralist view. I will propose a view of the universe that recognizes at least three different but interacting sub-universes.

There is, secondly, the mental or psychological world, the world of our feelings of pain and of pleasure, of our thoughts, of our decisions, of our perceptions and our observations; in other words, the world of mental or psychological states or processes, or of subjective experiences. I will call it ‘world 2’. World 2 is immensely important, especially from a human point of view or from a moral point of view. Human suffering belongs to world 2; and human suffering, especially avoidable suffering, is the central moral problem for all those who can help. World 2 could be subdivided in various ways. We can distinguish, if we wish, fully conscious experiences from dreams, or from subconscious experiences. Or we can distinguish human consciousness from animal consciousness. The reality of the mental world 2 – and with it, the reality of human suffering – has been sometimes denied; more recently by certain monistic materialists or physicalists, or by certain radical behaviourists. On the other hand, the reality of the world 2 of subjective experiences is admitted by common sense. It will be part of my argument to defend the reality of world 2.

My main argument will be devoted to the defence of the reality of what I propose to call ‘world 3’.

By world 3 I mean the world of the products of the human mind, such as languages; tales and stories and religious myths; scientific conjectures or theories, and mathematical constructions; songs and symphonies; paintings and sculptures. But also aeroplanes and airports and other feats of engineering. It would be easy to distinguish a number of different worlds within what I call world 3. We could distinguish the world of science from the world of fiction; and the world of music and the world of art from the world of engineering. For simplicity’s sake I shall speak about one world 3; that is, the world of the products of the human mind. Many of the objects belonging to world 3 belong at the same time also to the physical world 1. Michelangelo’s sculpture The Dying Slave is both a block of marble, belonging to the world 1 of physical objects, and a creation of Michelangelo’s mind, and as such belonging to world 3. The same holds of course for paintings. But the situation can be seen most clearly in the case of books. A book, say volume one of my own set of Shakespeare‘s Works, is a physical object, and as such it belongs to world 1. All the individual books belonging to the same edition are, as we know, physically very similar. But what we call ‘one and the same book’ — say, the Bible — may have been published in various editions which physically are vastly different. Let us assume that all these editions contain the same text; that is, the same sequence of sentences. In so far as they do, they are all editions, or copies, of one and the same book, of one and the same world 3 object, however dissimilar they may be from a physical point of view. Obviously, this one book in the world 3 sense is not one book in the physical sense. Examples of world 3 objects are: the American Constitution; or Shakespeare’s The Tempest; or his Hamlet; or Beethoven’s Fifth Symphony; or Newton’s theory of gravitation. All these are objects that belong to world 3, in my terminology; in contradistinction to a particular volume, located at a particular place, which is an object in world 1. This volume can be said to be a world 1 embodiment of a world 3 object. If we discuss the influence of the American Constitution on the life of the American people or its influence on the history of other peoples, then the object of our discussion is a world 3 object; similarly if we compare the often very different performances of one dramatic work, say Shakespeare’s Hamlet. Of most though not of all world 3 objects it can be said that they are embodied, or physically realized, in one, or in many, world 1 physical objects. A great painting may exist only as one physical object, although there may be some good copies of it. By contrast, Hamlet is embodied in all those physical volumes that contain an edition of Hamlet; and in a different way, it is also embodied or physically realized in each performance by a theatrical company. Similarly, a symphony may be embodied or physically realized in many different ways. There is the composer’s manuscript; there are the printed scores; there are the actual performances; and there are the recordings of these performances, in the physical shape of discs, or of tapes. But there are also the memory engrams in the brains of some musicians: these too are embodiments, and they are particularly important. One can, if one wishes, say that the world 3 objects themselves are abstract objects, and that their physical embodiments or realizations are concrete objects.